Welcome to a series of weekly poems, selected by guest editor Jane Burn on the theme of Trauma. We start with Question by Marg Roberts. Jane says ‘Question’ is a snapshot into a surreal world. It has an uncomfortable air of other-worldly un-belonging, a suffocating sense of displacement. It speaks of a fate that so many of us might fear – and ending up in loneliness and confusion in a place we no longer recognise.

This hard, upholstered chair is not mine.

Through the windows
men and women get out of cars
to go shopping.

The door is not our door.

In the corner of the room is an aquarium
Angel fish, Zebra fish and glints of colour.
We have a dog called Roger
We aren’t keen on fish.

Two women in uniform
step into the room
though no-one is ill.

In the palm of my hand a biscuit is melting.
I lick the chocolate
as delicately as a kitten.

Next to me
an elderly couple sit close on the settee.
She slips a hand into the front of his trousers.
Leaves fly off the trees.

A woman calls, ‘Time for tea.’
I get up from my chair and follow her.
A voice inside me asks
‘How did you know I was here?’

* This poem was first published by Cannon’s Mouth September 2013 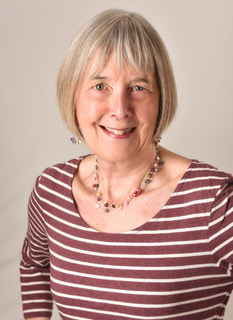 Marg Roberts is a poet and a novelist. She says “my mother had dementia for about 14 years before dying of old age, so the ‘trauma’ is of a different kind from that of Jane Burn’s. The shock was a constant. In Question I am in my mother’s head after we took her into residential care. I wanted to understand her struggle to make sense of that experience.”

Marg is published in Obsessed with Pipework. Her novel, A Time for Peace, was published by Cinnamon Press in October 2016 and is set in Serbia during WW1.