Welcome to the first of ten poetry selections by our guest editor Kinsman.

“This poem serves as a counter point to the media portrayal of those who come to this country seeking asylum, which often treats them as if they were some kind of invasive species rather than human beings. Often the act of physically getting here is fraught with difficulty and danger but the media chooses to portray this as cartoonish idiocy rather than desperation and determination. When we take the time to humanise people whose narratives are skewed in such a manner, we not only protest the biases of the media, we also stretch out a hand to help. The ending of this particular poem asks a great question about why we would cheer for escaped pigs but not escaped people.”

The Athletes’ Village leaves much to be desired,

but there’s no lack of enthusiasm. It’s a steeple-chase

over 31 miles. Haroun’s been practising hard –

from the bloody sands of Sudan to the concrete beds

of Sangatte. He’s out of the blocks at nightfall

along the track with the breath of family behind him.

as they read the latest. At 28 miles he hits the wall.

No podium for Haroun, though he heard the Brits

hot-footed it off a knackers’ truck to freedom.

Note: Abdul Rahman Haroun was arrested in the Channel Tunnel attempting to seek asylum in the UK. 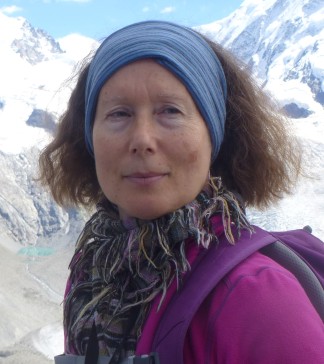 Claire Booker is a poet and playwright who lives in Brighton. Her debut pamphlet ‘Later There Will Be Postcards’ is out with Green Bottle Press. Her poetry has appeared widely, including in Ambit, Magma, The Morning Star, Poetry News, Prole and Under the Radar. She blogs at www.bookerplays.co.uk

Don't miss the mighty Fran Lock on celebratingchange.blog this week!
The final poem in our Surviving Trauma series is by acclaimed poet Fran Lock - click the link in our biog to find her.
Join us for our penultimate poem in the ‘Surviving Trauma’ series, a piece about the way reality changes after loss, by Denni Turp.
Follow the link in our profile for new poems every Friday - this week Denni Turp.
Sexual menace pervades this week’s poem by Natalie Crick - click through the link in our biog to read this latest offering in our series on ‘Surviving Trauma’.
Our guest editor Jane Burn said this week’s poem by Natalie Crick scared the heck out of her - this is a poem of fairy-tale horrors, of quiet, claustrophobic menace, of fear that refuses to remain hidden. It is not a graphic depiction of sex ‘You part my lips with them, shut/my mouth with them,’ made me feel like the very trees were closing over my head. It does not hide from the truth.
Loading Comments...
Comment
×
<span>%d</span> bloggers like this: