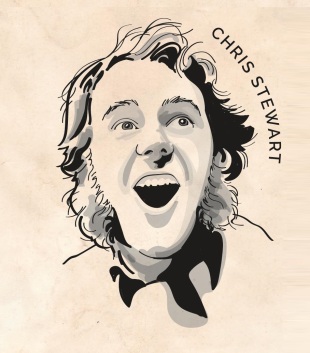 Stewart. Chris describes himself as “a background extra in a Harvey Weinstein movie because it is literally true. He is snoze af – so woke he had to hit snooze.  He’s been in loads of magazines and things you wouldn’t have heard of.  Interpret that as you like.” Catch him on Twitter and YouTube

Illustration of Chris by Scott Tyrrell

Middlesbrough Mondays
Silk Road ends here and the journey begins
The pavements are clickbait
sodden with commentators
sodium lamps spark to life like safety matches
the moon does the same
everyone’s a pixelated bystander in a Crimestoppers vid
an audience of sleeping pinatas
buzzed as sawtooth wave
like your tongue volted across an AA battery
ready to tango along the inside seam of a main road
so you rub at a spaghetti junction of varicose veins
the rosary bead of taillights jammed along dual carriageway of your ankle
and traffic lights are just cyclops with disapproving stares
Easter Island monoliths with amber noses
and gawping green teeth
Fog swarms terraces like mounted police
kettling you with batons of frost
pebbledashed people ask you for change,
plastered as an ASBO poster
two munters, buzzed as a pair of sawtooth waves,
head home to remix the decks of the bedsprings
What sweet interference patterns they will make
what peaks and troughs,
what addition and subtraction
My face is one half on an unresolved quadratic equation
that solves for the bangs of her
who is all Xs and the conundrum I need to solve
to my X and Y and other variables
Slicing Through The Sod
or If My Life Was A Sitcom
“Get an axe,” she said.
So I got an axe.
“That’s a hatchet,” she said.
“Get spade,” she said.
So I got a spade.
At least,
a piece of dowel with a handle
and a flat piece of metal on the end.
“That’s a shovel,” she said.
“Go get a hammer,” she said.
So I got a mallet.
“That’s a mallet,” she said.
And so on.  It’s set in a Garden Centre.
My life as a running joke
like on ‘Allo ‘Allo
or Keeping Up Appearances
or Last of the Summer Wine.
Mine would be Slicing Through the Sod,
because the difference between a shovel and a spade
is the spade’s straighter blade
and longer shaft
make it ideal for slicing through the sod,
edging lawns,
skimming weeds
and opening straight-sided holes or trenches.
Perhaps she tells me this in the first episode
in our ‘cute meet’
thus explaining the title
Then there’s the irony
me with my dainty shovel
taking the entire episode
to laboriously slice petite chunks of sod:
the C-roll callback sight-gag
that segues between the A and B-roll.
Perhaps there’d be a whimsical will-they-won’t-they element
introduced
to patch over the tedium –
a narrative purpose and dramatic impetus
to justify my inclusion
unlike real life where there is no subtext
in the inherent power imbalance
between me
and my senior
which in no way foreshadows
a romantic subplot
or identifies me as the archetypal
feral man who gains manners
and becomes the perfect match
for the headstrong woman;
no, I am not Bruce Willis’ David Addison
nor she Sybil Shepherd’s Maddie Haye,
I lack the wise-cracking bants
and she the self-affirmation.
I am not Petruchia to her Katherina
What is certain
is my character would always choose
the wrong tool for the job
and this is the metaphor
that imitates life.
And like life, no one is laughing.
Not her, not you and least of all me.

Don't miss the mighty Fran Lock on celebratingchange.blog this week!
The final poem in our Surviving Trauma series is by acclaimed poet Fran Lock - click the link in our biog to find her.
Join us for our penultimate poem in the ‘Surviving Trauma’ series, a piece about the way reality changes after loss, by Denni Turp.
Follow the link in our profile for new poems every Friday - this week Denni Turp.
Sexual menace pervades this week’s poem by Natalie Crick - click through the link in our biog to read this latest offering in our series on ‘Surviving Trauma’.
Our guest editor Jane Burn said this week’s poem by Natalie Crick scared the heck out of her - this is a poem of fairy-tale horrors, of quiet, claustrophobic menace, of fear that refuses to remain hidden. It is not a graphic depiction of sex ‘You part my lips with them, shut/my mouth with them,’ made me feel like the very trees were closing over my head. It does not hide from the truth.
Loading Comments...
Comment
×
%d bloggers like this: